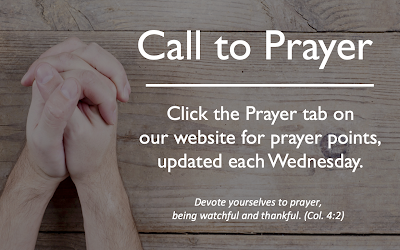 Relying on the One who raises the dead

The tomb is empty…

He is risen indeed! 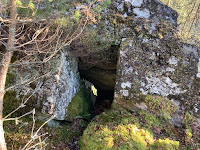 I enjoyed the chance this past Sunday to share again the events of that first Easter morning. While I knelt beside that empty cave on the farm I loved gripping those rocks and thinking of how they were sitting there at the very same time as God the Son walked this earth as a man. Those rocks are as real as those of the tomb where they laid Jesus dead. And Jesus’ resurrected body was no less real either - able to be seen and touched.

Once we grasp that the resurrection of Jesus from the dead is a historical event (not just a nice metaphor, as some would like to portray it), then we realise we’re dealing with a God who has the power to raise the dead, a Saviour whose every word has been vindicated and who longs to unite us to himself in his resurrection life! This should impact every area of our lives. One of those areas is that of suffering.

I know we’ve just finished 4 weeks of reading Jeremy Marshall’s terrific booklet, Hope in the Face of Suffering, but I’m not sure we can ever have too much teaching on how to faithfully respond to and endure suffering. So, I hope you’ll allow me to share something from Scripture that I’ve found helpful to me in recent weeks. It’s what the Apostle Paul says in 2 Corinthians 1:8-9:

(v8) We do not want you to be uninformed, brothers, about the hardships we suffered in the province of Asia. We were under great pressure, far beyond our ability to endure, so that we despaired even of life. (v9) Indeed, in our hearts we felt the sentence of death. But this happened that we might not rely on ourselves but on God, who raises the dead.

We don’t know exactly what hardships and pressures Paul is specifically referring to. They were certainly intense to the point where he ‘despaired even of life’ (v8c). He did say in his first letter that in Ephesus he ‘fought wild beasts’ (1 Cor 15:32) so that may have been what he was referring to. But we know too that he faced real hostility from many different groups as he proclaimed the news of the risen Christ in that city for two years. He also suffered from a chronic health condition. Furthermore, he taught constantly and must have been pastoring new believers and on top of all that making tents as a source of income. So there are many things that could have led him to feel ‘under great pressure, far beyond our ability to endure (v8b)’.

Paul says ‘Indeed, in our hearts we felt the sentence of death.’ (v9a). So why would a loving God allow one of his faithful followers to go through these sufferings and the associated heart-wilting experiences of fear and despair?

Well Paul discovered the answer to that question: ‘But this happened that we might not rely on ourselves but on God, who raises the dead’ (v9b).

He recognised that God was using these sufferings to stop him relying on himself and to give him an ever-greater trust in God. As Jonathan Lamb says in his book, Strength in Weakness:

‘In desperate times we learn to hold him fast. God’s purpose in our lives is not to bypass difficulties but to transform them. He does not magically remove us from the pressures, but instead uses those very events to expose our complete inadequacy and demonstrate his complete reliability. If we fail to learn these lessons, then the real tragedy of Christian suffering is the wasted opportunity.’

Whatever suffering you or I are going through right now, or will face in the future, it is a God-given opportunity for us to turn from our self-reliance and our need to be in control and to hand over everything to the powerful and compassionate One who raised our Lord Jesus from the dead. Easier said than done, I know! But by faith we’re united to Christ in his resurrection power and are given the Spirit who enables us daily to rely on God not ourselves.

Now to him who is able to do immeasurably more than all we ask or imagine, according to his power that is at work within us, to him be glory in the church and in Christ Jesus throughout all generations, for ever and ever! Amen. (Ephesians 3:20-21)

Love to you as we seek to live in the light of the resurrection, 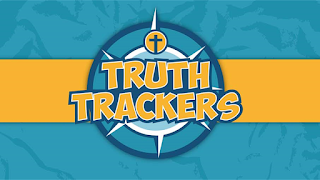 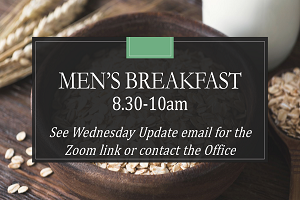 
Alternate Saturdays hosted on Zoom 8.30 -10am
If you’ve never been to a Men’s breakfast before, please join us with
the link is on the Wednesday Update email or contact the church office 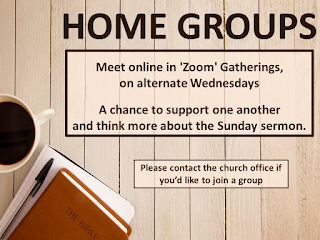 Lifting up our eyes in suffering 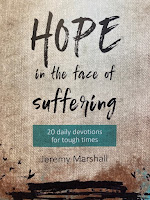 Jeremy Marshall’s ‘Hope in the face of Suffering’ booklet we’ve been reading as a congregation, has ministered to my weak and fear-prone heart these past days. What about you? In the face of fear, suffering and death, Jeremy calls us to turn to God’s Word, and ultimately to God Himself, and to know that ‘we are not left to ourselves because the Lord Jesus Christ is at our right hand. He takes us by the arm and steadies our weak knees. He has conquered death and He will bring us home to His right hand where there will be no more fear, suffering and death, only joy and eternal pleasures forevermore.’ (p25).
We’ve been reading the daily devotions at family worship and although my children may not necessarily follow everything he’s saying I think they are getting to grips with two things that I believe are so important for us to grasp at any age as Christians:

When we grasp these two truths, then life for Jesus-followers (whatever our age) is no longer a game of who can dodge-the-suffering, but involves preparing our hearts for suffering; persevering and praising God as we suffer; and encouraging our fellow-believers as they go through suffering.

I have a Beyond Suffering Bible with notes and devotions written by Joni & Friends and I came across something in it this week that amplified this hard but glorious truth: that suffering helps us turn our eyes away from the temporary things of earth and to God and our eternal hope. I attach her message below for your encouragement.

Whatever we’re going through today, may we set our minds on things above.

Tuesday 9th March 2021 - we received advice from the Church of Scotland’s Law Department  that Annual Stated Meetings (ASM) should not take place online and so we have to
postpone our ASM tomorrow evening (Thurs 11th March).
We invite you to read the accounts on the link below and send your questions to the
church office.
Accounts for year ended 31 December 2020
Click here to read/download the Accounts
Annual Stated Meeting Tuesday 5th March 2020

Click here to listen to/download the audio file of meeting